Thousands of litres of industrial solvents along with large amounts of precursor chemicals used in the production of synthetic drugs have been seized by police from a rural home in Chilliwack.

On June 2, 2022 a BC RCMP Federal Clandestine Laboratory Enforcement and Response (CLEAR) team investigation culminated in the execution of a search warrant on a residence on Extrom Road. During the search, the CLEAR Team located a significant cache of chemicals used in synthetic drug production as well as other signs that a clandestine laboratory was in the early stages of being constructed. Among the chemicals recovered were 160 litres of a Class A precursor, propionyl chloride, and over 2,000 litres of industrial solvents commonly used in the illicit production of synthetic drugs.

According to the European Monitoring Centre for Drugs and Drug Addiction, a lethal dose of pure fentanyl is two milligrams, which is roughly the size of a few grains of sugar. The amount of propionyl chloride seized could have made 320 kilograms of pure fentanyl, which is equivalent to 320 one-kilogram bags of sugar.

The recovery of these precursors represents a significant disruption to the illicit synthetic drug market, said Superintendent Bert Ferreira, Officer in Charge of the BC RCMP Federal Serious & Organized Crime Border Integrity Program. More importantly, this seizure prevents additional deadly drugs from harming our communities that continue to suffer from the opioid crisis.

No arrests were made at the residence and no charges have yet been laid. The investigation is ongoing.

The BC RCMP Federal Clandestine Laboratory Enforcement and Response (CLEAR) team is a specialized police unit that has the training and equipment necessary to safely dismantle clandestine drug laboratories and process the hazardous materials often found within.

If you suspect that you know where a clandestine illicit drug laboratory is contact your local police. They can investigate whether any illegal activity is taking place and contact the Federal RCMP CLEAR team to assist if required. 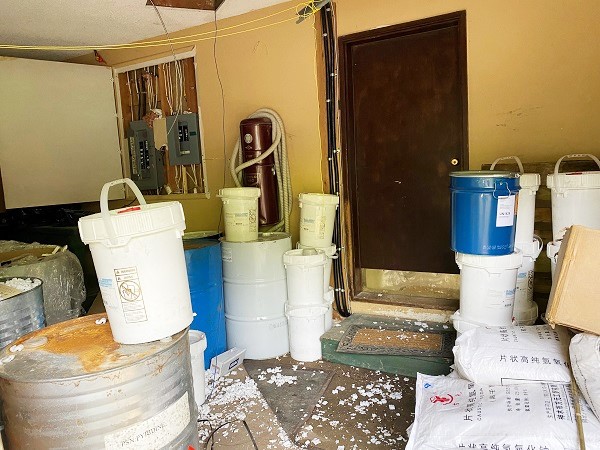