Pedestrian knocked out by thrown egg 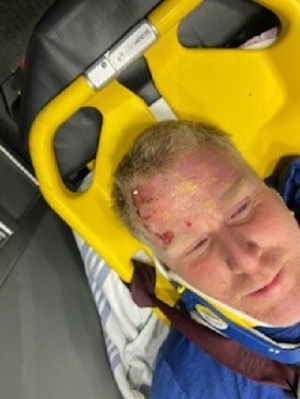 A Nanaimo man continues to struggle after being knocked unconscious by an egg thrown from a passing vehicle. The incident occurred at approximately 10:45 PM on February 25, 2022, on Uplands Drive near the Turner Road intersection.

Police arrived to find the 37 year old victim being attended to by paramedics who transported him to the Nanaimo hospital for treatment.

Police spoke with his friends who were with him prior to the incident. All three, including the victim, were standing at the bus stop on the west side of Uplands Drive. At one point a small dark colored vehicle drove past and an object was thrown from a side passenger window. It struck the victim in the head and he fell to the ground. Only then did they realize that the object thrown at them was an egg.

The victim has limited memory of the incident and continues to have some difficultly with his thought process. He has agreed to have his picture released showing him being treated.

We believe the person who throw the egg probably didn’t intend to cause injury and may have no idea what actually happened. With that in mind, this individual and those in the vehicle, need to step up, take responsibility for their actions and call the police, said Constable Gary O’Brien of the Nanaimo.

The picture attached is being released as investigators believe it will further the investigation.