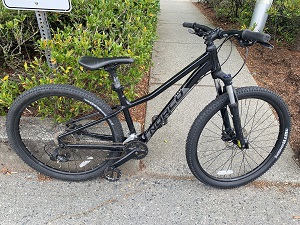 On Saturday May 28, 2022, a front line officer was on patrol in central Nanaimo when they came across an individual who is well known to the local police and was in possession of a relatively new mountain bike.

After exchanging pleasantries and getting caught up on their respective lives, the officer attempted to glean some background information about the bike. At this point the conversation went downhill. After removing the crack pipe and paraphernalia from the hand of the 37-year-old man, the officer asked him a few basic questions, such as, how much did the bike cost, where it was purchased, from who, and the name of the seller. It became evident at this point to the officer that based on the answers provided, this person was not the lawful owner of the bike. When he was told the bike would be seized for safe keeping, the individual offered no resistance and went about his way.

The bike, shown in the attached photo, is a blue Norco Storm. It had a sticker on it from Cranky’s Bike store located in Aldergrove. That business was contacted with negative results. The bike was also checked against the Garage 529 database with no luck. If anyone has information on who may own the bike, please contact the Nanaimo RCMP non-emergency line at 250-754-2345, and quote file # 2022-17952.