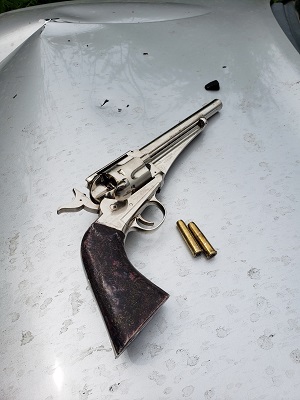 At approximately 1:30 PM on Tuesday June 7, 2022 police responded to a report of a man who had broken into a barn located on a rural property on Maughan Road located south of Nanaimo. When confronted by the property owner, the suspect produced what appeared to be a large handgun. The suspect then fled in a vehicle.

A police officer quickly intercepted the suspect vehicle and attempted to initiate a traffic stop. The driver, later identified as a 34-year-old man, refused to stop and sped off. A short time later another officer came upon the vehicle and noted that it was weaving and driving directly at his police vehicle. The suspect vehicle crashed into the front grill of the officer’s vehicle causing the officer's airbags to deploy. The officer, while shaken from the airbag deploying, managed to exit his vehicle and take control of the suspect without incident. Other officers soon arrived and the suspect was arrested for Break and Enter

EHS was called as the suspect had sustained a significant cut to his forehead. The officer was not injured and was able to continue working. The suspect vehicle, described as a grey older model Jeep, was searched or weapons or evidence. Located on the floor of the front passenger side was a Remington 1875 BB gun resembling a 357 Magnum handgun. Also found were power tools and a crack pipe. It was later confirmed that the tools were stolen from the barn that the suspect had been seen leaving earlier.

The suspect was identified as Christopher Bergsma of Nanaimo, a prohibited driver with warrants for his arrest issued out of Sidney and Saanich. On Wednesday June 8th charges were formally laid against Bergsma for Break and Enter, Possession of Break in Tools, Dangerous Driving, Fail to Stop, and Breach of Court Order x 4.

Shown in the attached photo, is the replica Remington 1875 BB gun handgun that was seized from Bergsma. We are seeing these types of replica firearms more or and more often on the streets. Whether they are found in possession by criminals or with youth simply trying to impress their friends, it is not something we take lightly. What these individuals do not realize is that police officers will always treat them as real firearms until such time they are proven otherwise. With that in mind, these calls could end with tragic consequences, said Constable Gary O’Brien of the Nanaimo RCMP. When the court proceedings for Bergsma are concluded, the replica firearm will be destroyed.

Bergsma was remanded until June 14th to await his next court appearance.